Sophie Mckenzie - The Medusa Project - The Set Up - Book Review 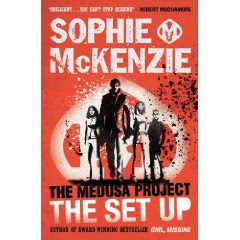 This is a great book read which is heading for the bookshelves this summer.
I requested a copy of this book from the publisher as I was very eager to read this book. I'd heard secret whispers about The Medusa Project not knowing who wrote it or what it was. So when it landed in my book pile I had to read it straight away and I was not disappointed in any way.
Sophie is writing out of her skin to deliver this page turner. The great thing about the story is the character relationships the jealousy and the growing up and young adult emotions which adds a gripping reality to the plot. The story is about four teenagers who are all connected by being implanted with a Medusa gene which was injected into their pregnant mothers. The story then goes through a journey of adventure where they discover they have life changing abilities, which they try and come to terms with. I don't want to give much more away to this exciting story. But to sum up, this story is a crazy rampaging teen adventure involving doing what's right in the adversity of wrong-doing. It has great action moments, super goodies and evil doing baddies. This is the first part in a four book project with the second book to be released in January 2010 called Hostage. I'm looking forward to the next installment already. Five out of Five, I'm a new fan of Sophie Mckenzie - great stuff.


Synopsis For the book

Fourteen years ago, scientist William Fox implanted four babies with the Medusa gene - a gene for psychic abilities. But Fox died and the babies were hidden away for years. Now the children are teenagers - and unaware that their psychic powers are about to kick in. Cocky, charismatic Nico thinks his emerging telekinetic abilities will bring him money, power and the girl of his dreams. He's about to find out just how wrong he is..

Sophie McKenzie was born in London, where she still lives with her son. She has worked as a journalist and an editor and goes boxing training in her spare time. Her debut children's novel, Girl, Missing, was published by Simon & Schuster in 2006. Her second novel, Six Steps to a Girl, published in August 2007. Three's a Crowd is its sequel.

Other books to look out for are:

Girl Missing,Blood Times,Six steps to a Girl,There's A Crowd,The One And Only.
Posted by Mr Ripley's Enchanted Books on April 28, 2009