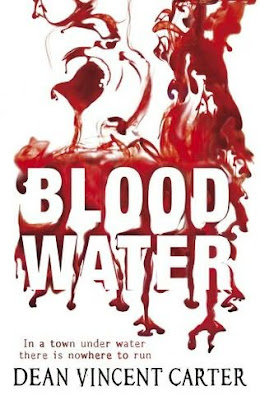 This is Dean Vincent Carter's third young person's horror book. As usual it has a definitive style of writing which parallels with great horror writers within the adult genre.
This book has a distinctive theme running through the book which could easily be transcended into a movie. In fact at times I wondered whether it was written with this possibility in mind. The short, sharp horror scenes climaxed throughout leaving very little rest time in between the pages. The "flood" created tension which enhanced the infinite danger of the cities inhabitants thus making a gritty and edgy read.
The concept of intelligent "outer" life-form versus human life-form is challenged greatly within this book. It raises some interesting emotions about survival and character morality.
A thought provoking read with many great horror qualities. Suitable for those who can't normally stomach horror. As the description lends itself to its intended younger audience without being too gruesome. Four out of Five as it is a little bit short, I would like to see Dean focus all of his time to writing as he has amazing potential to be an all-time great.


They're all dead now. I am the last one. Dr Morrow can't identify the 'thing' he found living in the lake but he knows it's dangerous ...then it goes missing ...Caught in the flood that is devastating the town, brothers Sean and James stumble across Morrow and the carnage left at his lab. The missing specimen is some kind of deadly parasite that moves from person to person, destroying its hosts in disgusting, gory ways. The death toll will rise along with the waters unless the brothers can track down the homicidal specimen and find a way to destroy it.

I was born in July, 1976 in the West Midlands and spent the first six years of my life in Bewdley near Kidderminster, before moving to Tenbury Wells, Shropshire where many members of my family still live.

At around thirteen years of age I spent one bored Summer afternoon sitting in the back garden of a restaurant where my mother worked, reading a book my aunt had ordered by mistake from a book club. Stephen King’s Misery, wasn’t exactly her cup of tea, but it was, as I was soon to find out, mine. I devoured the novel and found within its pages the inspiration to write my own stories. The first, Revenge, was very much a tentative footstep in the general direction of storytelling, i.e. it’s not exactly my finest piece of work. The story lasted only six pages, (luckily) was very Misery-derivative, and more than a little contrived and predictable. But we all have to start somewhere, and there was as good a place as any.

During my last few years of high school I tried a few more short stories, then attempted a book, Carnival, which eventually ended up as a large short story, possibly a novella, about a travelling carnival of genetically modified animals and freaks. I still have a copy of it, typed out on an old Olivetti typewriter given to me by an uncle. Even now the smell of typewriters (a heady mix of ink and metal) brings back memories. Personal Computers will always be my weapon of choice when it comes to word-processing, but they have none of the excitement, the romance, the immediacy of typewriters.
By Mr Ripley's Enchanted Books on April 17, 2009