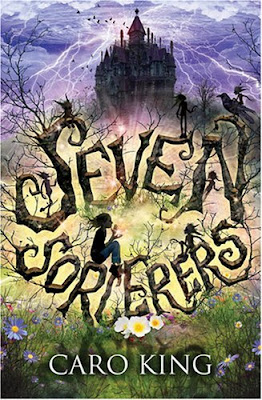 This is the first part in a two-part series.The story starts with Toby, a young boy snatched and taken away by Skerridge the Bogeyman. The story follows Nin's thwarted journey to bring back her brother. On the way she battles many dangers trying to find Toby, her brother.
This is an interesting debut story written in the style of Joseph Delaney. I enjoyed reading this book as it had more to offer then most books. In some parts it read like poetry. Caro has used some fantastic ideas which enhance the on-going story. It is a quick read which has a fast flowing plot with plenty of detail.
Skerridge is my favorite character, he has been well written with great moments and some humorous sections which made me chuckle along the way.
The element of surprise within the plot keeps the reader hooked right to the end. Especially as the theme is quite commonly used as a plot,I was very pleased that it had more going for it. This is to the credit of the author who is appearing as a surprising debut. Well worth a read and I am looking forward to seeing what happens in the sequel. I give this book Four out of Five.

Nin had never liked Wednesdays, but this one took the biscuit. On this Wednesday she woke up to find that it was raining buckets and that her brother had ceased to exist. Ninevah realises she is the only person to remember Toby because whoever took him is about to make her disappear too. Enter Skerridge the Bogeyman, who steals kids for Mr. Strood. With his spindle, he draws all memories of Nin out of her mother's head. Nin escapes to the Drift, the world that her new friend Jonas and Mr. Strood inhabit. But the Drift is filled with the fabulous and the dreadful; tombfolk, mudmen, and the spirits of the seven sorcerers who once ruled the land. What is the secret of the Seven Sorcerers, and will Nin and Toby escape their fate at the House of Strood?

Caro King was born in London and raised in Surrey where she now lives with her partner, Kevin. She studied art and now works at the Home Office. Seven Sorcerers came from a rainy lunchtime when she began mapping out the world of the Drift. Skerridge and his waistcoat came later.

I'm really looking forward to reading this - and especially pleased that this cover illustrator (Zdenko Basic) is doing my U.S cover!