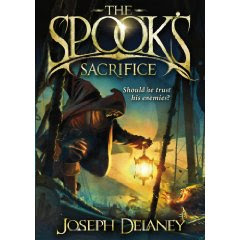 As the Spook's apprentice Tom's first duty is to protect the County from the dark. But now Mam needs his help in her homeland of Greece. One of the most dangerous of the old gods, the Ordeen, is about to return there, bringing slaughter and devastation. Meanwhile, the Devil himself is still loose and if he and the Ordeen join forces, a new age of darkness will descend. Mam has summoned a powerful group to her side but among them are Tom's old enemy, the Pendle witches, including the assassin Grimalkin, and the cunning clan leader Mab Moldheel. Can Tom go against all the Spook has taught him and ally himself to the witches? What is the secret that Mam is keeping from him? And what sacrifices must be made in the battle against the dark?

When his butterfly-collector father is swindled to within an inch of his life, a vengeful Hector leaves the city of Urbs Umida in pursuit of a fiendish villain with a glass eye. The trail leads to Withypitts Hall, a forbidding Gothic mansion as warped as its inhabitants and their secret schemes. Soon Hector finds himself embroiled in mysterious deeds more poisonous than his worst imaginings, but every twist and turn brings him closer to his revenge ...The third dark and diabolical book from a devilishly talented author.

Paris: Dr John Dee has torn the city apart in every attempt to intercept the immortal Nicholas Flamel and Sophie and Josh Newman. Paris' streets are in ruins, Notre Dame is destroyed. Dee has the book of "Abraham the Mage", but he's still missing the two pages the Dark Elders need for the Final Summoning. Without them the spell cannot be cast, and Dee is well aware that the Dark Elders will not rest until they are in power and the human race is destroyed - or he is. London: If Nicholas Flamel hopes to defeat Dee, he must find an Elder who can teach Josh and Sophie the third elemental magic - Water Magic. The problem? The only Elder who can do that is Gilgamesh, and he is completely insane.

Mr Ripley's U.S Hardback pick of the Month is.

R.D Henham - Green Dragon Codex (The Dragon Codices) Mirrorstone - June 2009
When ten-year-old Scamp Weaver finds a locked chest in a forest clearing, he feels like his life is finally about to change for the better. But he doesn't bargain for just how much change the chest will bring. Inside he finds a dragon egg and a mysterious ancient scroll, which set Scamp and his best friend Dannika off on a harrowing adventure, chased by dragon hunters who want the contents of the chest for themselves. Life gets ever more complicated when the baby green dragon hatches. Will this cute, mischievous hatchling really grow up to be an evil green dragon?


Also out early in the U.S is Angie Sages - Septimus Heap: The Magykal Papers which will be released by HarperCollins - 23 June 2009.

Enter the world of Septimus Heap with this collection of previously unpublished papers.


The private journals of Septimus, Jenna, and Marcia Overstrand.


The best—and worst—places to eat as described in The Egg-on-Toast Restaurant Guide.


Sirius Weazal's Speedy Guides to the Palace, the Wizard Tower, and Wizard Way.


Excerpts from the Pigeon Post Biography series and the Heaps of History series.

do you get all your books before they're printed? and does that mean we have to wait until june until we can buy them at amazon?
Sabs
x

I get some of the books before they are published which obviously means I can review them before they come out.
The books that are new for June 2009 I'm afraid you'll have to wait for. But | hope to make people aware of what to look out for and wet the appetite to read them!
Thanks for taking time to find this blog, I hope you have found it interesting. I've just put a review for the "Charlie Keeper" book up, I (like you) was very taken by this book.