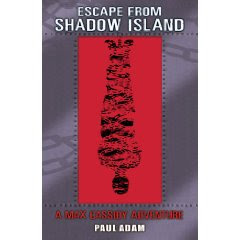 I wasn't actually aware of this book until I received notification from Random House. The synopsis sounded promising and I was instantly intrigued by the escapology talents of the main character "Max Cassidy" - interestingly (as a side note) do most successful characters have to have short names in this modern day?
Anyway back to the book, it was full of description from the escapology acts, to the penetration of the island and then to the final escape. I particularly liked the way Max involved adult characters to help him overcome some of the more difficult tasks. I felt that this credited the story with some realism - at times "the child defeats adult world alone" can become too incredulous.
The story was fast paced, intriguing, highly descriptive and well co-ordinated. I liked his special regurgitating effect and the use that this trick played within the story. I was pleased he found the letter from his dad at the end, it helped to engage me in speculating the next adventure. I'm looking forward to this next chapter in his adventurous journey. Four out of Five - would recommend to 9+ and all adults.

Max is an ordinary north London schoolboy by day, but at night he performs sell-out public shows as an escapologist - nicknamed The Half-Pint Houdini by the tabloid press. His father, Alexander, was also a world-renowned escapologist, who disappeared two years earlier in the Central American state of Santo Domingo. His body was never found, but Max's mother, Helen, was convicted of murdering her husband by a Santo Domingan court. One evening, after his show, Max receives a visit from a mysterious man from Santo Domingo - Lopez-Vega tells Max that his mother's trial was rigged and, if Max comes to his hotel room the following night, he has something to give him.When Max goes to the hotel, he finds Lopez-Vega dead, shot through the head. The room has clearly been searched by the killer, but what was he looking for? By chance, Max finds a piece of paper hidden under Lopez-Vega's wig. Written on the paper is a sequence of eight numbers - 83521113. What do the numbers mean? Are they a code, or maybe the combination for a lock or a safe? Could they be the key to unlocking the mystery of his father's disappearance and getting his mother out of prison?

Paul Adam studied law at Nottingham University and started his writing career as a journalist. He has written ten critically-acclaimed thrillers for a grown-up audience that have sold widely around the world and have been translated into several foreign languages. Reviews have called his adult books "brilliantly imagined, fiercely authentic and wholly gripping" . Escape from Shadow Island is Paul's first book for children. He lives with his wife and children in Sheffield.
By Mr Ripley's Enchanted Books on April 21, 2009