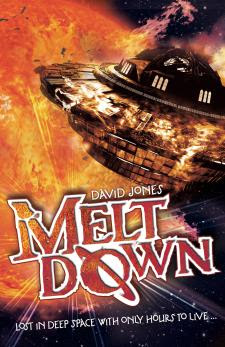 Mr Ripley's Book Review
The first thing about this book is that it's set in space, which is not an over used theme in books at the moment. Then there is the slightly religious undertone which comes from the spaceship full of monks, which is actually a floating cathedral called "Prominence" navigating the solar system. A final addition to this 'interesting' mix comes in the form of space pirates, whose mission it is to steal the monk's valuable pottery (that is made onboard the ship). Now all that stirred together makes one crazy story in space!

I have to say that this book was a cosmic read and I really relished it. It is certainly  a very different book, from the author's very first book published by Chicken House called "Baboon," which I reviewed during the earlier days of this blog. However back to this book. The plot is very imaginative and unexpected at times. The characters are very well constructed through the way they develop the mood of the story. I found the book to be particularly entertaining at the end, although it did leave me feeling quite sad when the story actually came to an end, as I wanted to continue to follow the characters to find out what became of them, but unfortunately as a stand alone book we will never know.

A particularly interesting part of the book (for me), was the detailed depiction of the monks making their pots and the intricate description regarding the whole process. All in all a 'booktastic' space romp which encompasses a crazy adventure to Sun and back. I give this book four out of five.
For those of you interested, this book has also been released as "Monks in Space," which was published in the U.S and Canada by Annick Press in Sept 2008.


Book synopsis
Aboard the Prominence, a spaceship abbey filled with holy treasures, is a 14-year-old novice-monk. But Bart is more interested in flying the old ship than worshipping the sun. When the Prominence goes to the aid of an unidentifiable spacecraft, it’s Bart who realises the danger of stopping. For not only are the passengers space-pirates, but the Prominence’sengines then fail. Temperatures soar as monks and pirates alike drift closer to the sun.

It’s up to Bart to risk everything or it’s meltdown.
An out-of-this-world, adventure from the extraordinary imagination of Baboon author David Jones. Meltdown is filled with zero-gravity action, memorable characters and mounting suspense as the end of hope draws near.
Published by Chicken House, January 2010
By Mr Ripley's Enchanted Books on November 06, 2009

I've just found your blog so hi! I hadn't heard of some of these titles before and they look really good!