Just a quick post which is looking into some of the more exciting books to be released 'over the water' in the U.S, early 2010. I have not done this feature for a while and thought I should update you on future releases. Today is the last day to vote on the "Book Cover Wars." Don't forget to vote and leave a comment as you will then be put forward to possibly win a signed, lined book. 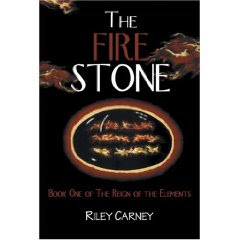 
Synopsis
Sixteen-year-old novelist Riley Carney works magic in this high fantasy adventure story brought to life by memorable, vibrant characters. The Fire Stone, the first book in the captivating Reign of the Elements series, is rooted in genuine adolescent thought and emotion throughout a journey of danger, friendship, and courage, as a group of teenagers, led by fifteen-year-old Matt, attempt to save their world. Matt knows how to shovel hay, dig trenches, and dodge his father’s whip, but when three terrifying creatures attack Matt, and he is rescued by a wizard, he kidnaps a baby alorath, and is befriended by elves, Matt’s life transforms overnight from dreary to astonishing. When he unwittingly joins a quest to find the Fire Stone, one of the elusive Stones of the Elements which have the power to destroy the world, Matt is thrust into a string of perilous adventures. He soon discovers that magic does exist and that he has extraordinary powers that can change his destiny and determine the fate of Mundaria. 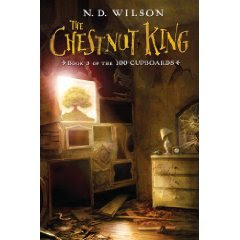 
Synopsis
When Herny York found 99 cupboards hidden behind his bedroom wall, he never dreamed they were doors to entirely new worlds! Unfortunately, Henry’s discovery freed an ancient, undying witch, whose hunger for power would destroy every world connected to the cupboards—and every person whom Henry loves. Henry must seek out the legendary Chestnut King for help. Everything has a price, however, and the Chestnut King’s desire may be as dangerous as the witch herself.


N. D. Wilson concludes a remarkable, worlds-spanning journey that began with one boy and one hundred avenues to adventure. 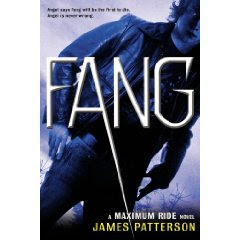 
Synopsis
Being a kid with wings--constantly on the run--has never been easy, and Max and her flock are getting tenser than ever. First, on a trip to Africa, they meet a mysterious billionaire whose intense scrutiny of the Flock makes her fear the worst. Then, a cryptic message from a young girl arrives, warning them "The sky will fall." And as if an impending apocalypse weren't bad enough, canny birdkid Angel makes a dire prophecy about Max's soul mate: Fang will be the first to die. Max's desperate desire to protect Fang brings the two closer than ever. But can the team weather the storm, or will the turmoil rip them apart for the last time? 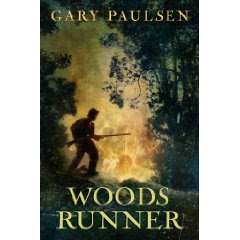 Samuel, 13, spends his days in the forest, hunting for food for his family. He has grown up on the frontier of a British colony, America. Far from any town, or news of the war against the King that American patriots have begun near Boston.

But the war comes to them. British soldiers and Iroquois attack. Samuel’s parents are taken away, prisoners. Samuel follows, hiding, moving silently, determined to find a way to rescue them. Each day he confronts the enemy, and the tragedy and horror of this war. But he also discovers allies, men and women working secretly for the patriot cause. And he learns that he must go deep into enemy territory to find his parents: all the way to the British headquarters, New York City.

I[m trying to vote for Jon Mahew's book, but can't find where and how to vote. Please count my vote. Thanks.