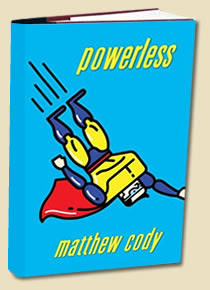 In a wholly satisfying debut, Cody tackles themes of heroism, sacrifice and coming-of-age, as played out in a comic book–inspired good vs. evil scenario. Soon after arriving in the small town of Noble's Green, Pa., where his family has moved to take care of his ailing grandmother, 12-year-old Daniel Corrigan discovers the existence of real-life superheroes. In this town, certain kids develop superpowers, which they use in secret to perform good deeds (for the most part). One catch: as soon as they turn 13, their powers and all related memories vanish. As Daniel forges a friendship with these extraordinary youths, he uses good old-fashioned investigative skills rather than superhuman abilities to uncover the secret of their powers' origins and the dark force that has been preying on the town's children for decades. What do comic books from the 1940s, a pulp hero, a burned-down orphanage and a pair of superhuman bullies have to do with the mystery? It all comes together in a tightly woven narrative characterized by a persuasive premise, memorable characters, a bit of intrigue and a sense of wonder. Ages 10–up.


Twelve-year-old Daniel, the new kid in town, soon learns the truth about his nice—but odd—new friends: one can fly, another can turn invisible, yet another controls electricity. Incredible. The superkids use their powers to secretly do good in the town, but they’re haunted by the fact that the moment they turn thirteen, their abilities will disappear—along with any memory that they ever had them. Is a memory-stealing supervillain sapping their powers?

Superhero kids meet comic book mystery in this action-filled debut about the true meaning of a hero.


About the author divides his time between writing and teaching college English. He lives with his wife and young son in New York City, where he is at work on his next novel for Knopf.