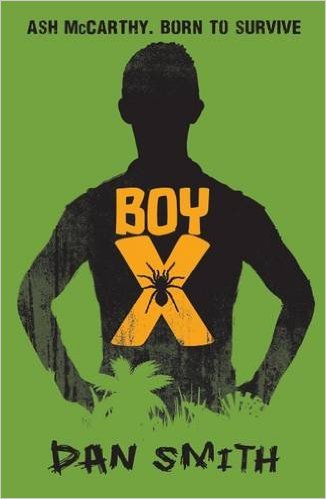 Kidnapped and drugged, Ash wakes up on a remote tropical island. His mum - a genetic scientist - has been imprisoned and infected with a deadly virus. Where is he, and what's he doing there? He sets out to cross the jungle to find out and rescue his mother. Soon he realises he's quicker and sharper than before. But there's something else ...why are the animals watching him, and how can he use the jungle to his advantage?

I'm a big fan of Dan Smith's previous books, so my expectations of Boy X (his new book) was very high. Especially as his previous book, Big Game, was an absolute smasher. I found a lot of similarities between the two books, which made me very excited as I turned the pages. I was not let down in anyway, as it had everything that I wanted in a story and more. This is another classic read that will stop time as you hurtle through the pages - all 287 of them.

No sooner will you start reading and you will be asking questions about what is happening. Ash McCarthy wakes up in a small and unfamiliar white walled room, with fluorescent light bulbs flashing in his eyes. He has no idea how he got there. He hears a voice inside his head. What could be happening? As you follow him through the door, you will find a gigantic mystery that will keep you on your toes.  As you walk along the corridor, this will lead you on a deadly path of friendship, gunfire and mayhem.

You are cleverly placed inside an action packed bubble that does not let up one ounce of a Howler monkey's toe. You'll follow an explosive mission impossible that will rock you to the jungle core and, believe you me, this jungle is crazy beyond believe. It really makes the story come alive; breathing wild danger and  battling strange creatures. The excitement is palpable as Ash and his new found friend, Isabel, scrape danger in pursuing a deadly virus that could wipe out the human race in a blink of a boar's eye.

The story provides just enough detail to rattle the imagination. Ash and Isabel are great characters, in my opinion. Ash is a normal twelve/thirteen year old or he thought he was, but he develops some unknown skills that suddenly come in useful and add to the mystery. Isabel is my favourite character; she is jungle savvy, very feisty and courageous. She also is a crack shot with a rifle - I really did rally behind her, hoping that she would survive.

This is a great adventure with a race against time that boys and girls will equally love. There is a splash of terror, untold dangers and a
mysterious black research facility. All of which take place in a mega jungle wonderland, on an even stranger island.

As your heartbeat thumps wildly, you'll try and second guess what is going to happen and especially the end of the book. However, you'll find this difficult as it throws up some unexpected twists and turns. There is a totally unexpected cliffhanger of an ending which could easily lead to a follow up book. At least that is what I am hoping as it would be a very welcomed sequel to read.
By Mr Ripley's Enchanted Books on January 12, 2016