Interview with Patrick Samphire - Secrets of the Dragon Tomb 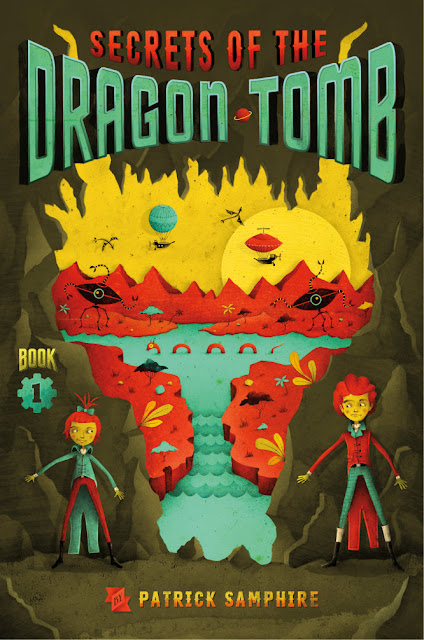 Welcome Patrick Samphire to Mr Ripley's Enchanted Books. Thank you for taking the time to answer some questions about your debut book, Secrets of the Dragon Tomb, which has been published by Henry Holt in the US. After reading this interview, I hope that you will be excited to read the book just like me. Have a read and see what you think?

Tell us a little bit about SECRETS OF THE DRAGON TOMB?
SECRETS OF THE DRAGON TOMB is a thrilling middle grade adventure story set on Mars in the year 1816. But this is not the Mars you might expect. It's full of strange, clockwork machines, weird, alien creatures, and dinosaurs. In the north, the ancient dragon tombs are packed with incredible devices and technology.

Our hero, Edward Sullivan, spends his time trying to keep his eccentric family from complete disaster, but when his parents and eldest sister are kidnapped as part of a scheme to loot an undiscovered dragon tomb, he, his other two sisters, and their mysterious cousin set off on a perilous pursuit across the Martian wilderness. Together they must evade the bad guy's minions, battle mechanical nasties, and escape deadly Martian hunting machines. If they can't, they will never uncover the secrets of the dragon tomb and rescue Edward's family.

12-year-old character Edward Sullivan, what is he like as a character? Do you have any similar traits?
All of my characters have some part of me in them, but I definitely sympathise with Edward more than any of the rest of them. All of Edward's family are exceptional in some way. His father is a genius, and his little sister is turning out to be just as clever. His oldest sister is incredibly sweet and beautiful, and his middle sister is very caring and compassionate. Edward, though, is pretty ordinary. He's not a hero or super-intelligent or super-athletic. But what he is is absolutely determined and he refuses to give in. I don't know if that's me or not, but it is the kind of hero I like. I don't think it's much fun when the hero is cleverer or stronger than everyone else, but put someone who is basically ordinary in a terrible situation, and then you've got a story.

Can you describe a mechanical nasty? How do you get your ideas?
I absolutely love coming up with mechanical nasties. There are loads of them in the book. The world of my story is one where there are lots and lots of eccentric inventors with the kind of technology that lets them come up with whatever wild ideas they can. If you can imagine it, someone has made it out of cogs and levers and springs. My favourite ones in this book are the mechanical crabs, which are basically metal crabs with razor-sharp claws that are powered by springs. I don't want to say too much about them because I don't want to give away what happens in the story, but they have a great role to play.

One of my biggest inspirations for this book was old science fiction, particularly science fiction art from the nineteenth and early twentieth century. The most important influence was a French artist (and writer) called Albert Robida, who drew incredible, quirky machines. I didn't take any ideas directly from those artists, but what I did do was start each day by flicking through their art to get myself in the right headspace. I also told myself that there was no idea so wild or so ridiculous that I couldn't use it. I think it's really important not to censor your ideas just because you're worried about what someone else might think of them.

What do you think is funny, especially in Middle Grade Writing?
I must admit I'm not a big fan of cruel humour I don't really like laughing at other people's misfortune. I think there has to be some kindness and warmth in humour, particularly in Middle Grade. Most of the humour in SECRETS OF THE DRAGON TOMB comes from the characters, and that's the kind I like. I like silly situations, but I particularly like the funny things characters do to get out of them. I'm a big fan of PG Wodehouse, and I think his style of humour translates well to Middle Grade.

What tips can you share in writing a believable world/background?
Detail. The key is, you need to know how everything works, even if you don't put it in the book. In fact, as the writer you should know many, many times more than you put in your book. It has to be there in your head. You need to know the whole of your world. Then you can write the story within it.

When you start off writing, it's tempting to just throw in some random, cool-sounding stuff, but if you don't know your world and you don't know how it all fits in, then it won't be convincing. For example, I have a detailed history for my Mars that goes back thousands of years. I have my own map (which is separate and much more comprehensive than the map that's in SECRETS OF THE DRAGON TOMB). I know a lot about the creatures. I know the history that the characters don't and all the misunderstandings that they have about their past. I know (pretty well) how the weird technology works. And so on. It can be intimidating, but you build it up over time and it makes what could be a ridiculous story into something believable.

What do you think makes a good story?
The thing that made me want to write when I was a kid was reading books that totally absorbed me and carried me away. The kind of book you could sink into and which felt even more real than the real world. I wanted to write the kind of books that could make someone else feel the same way. That's still what I like reading, and for me, that's a good story. A world and characters that draw you in so far you don't notice your house falling down around you.

What genre of books do you like to read? do you limit yourself to only the genre that you write yourself?

I've always been an enormous fantasy and science fiction fan, and that's what I read most of, but I do love lots of other books too, and I think every writer has to read widely. I've read some great mysteries, romances and literary novels in recent years. And, of course, I try to read as much Middle Grade as I possibly can, of all genres.
Do you think that the cover plays an important part in the buying process?

Yes, absolutely. Although there are plenty of great book blogs and review sites like Goodreads around, and people hear about books through word of mouth, when most people (including me) go into a bookstore, we don't know what we're going to buy. The thing that makes you pick up a book in the first place before anything else is the cover. I don't think anyone *buys* a book because of the cover, but covers are what draw them in in the first place. Covers have to tell you what kind of book you're getting and what type of story it's telling, they have to stand out from across the store, and they have to make you want to pick the book up. And they have to do it all in a split second. It's only when they manage that that you make the decision to find out what the book is about and maybe read a bit of it. A cover really can make or break a book.

As a child, what did you want to do when you grew up?
I know it's a bit of a cliche, but I wanted to be a writer. I went through those stages we all go through of wanting to be an astronaut or a racing driver or a fireman, but the first time I actually knew I really wanted to be something, it was a writer.

Is there anything else you would like to tell us, like new writing projects?
Right now I'm writing a proposal for a third book in the SECRETS OF THE DRAGON TOMB series. The second book, which will be called THE EMPEROR OF MARS, is going to come out at the beginning of 2017, and I'm going to pitch a third book to my publisher to see if she wants it. I've also started work on a completely unrelated Middle Grade fantasy with wizards, murder, and mystery, set in England in the 1930s. That's still in the early stages, so we'll see where it goes.


Patrick Samphire started writing when he was fourteen years old and thought it would be a good way of getting out of English lessons. It didn’t work, but he kept on writing anyway. He has lived in Zambia, Guyana, Austria and England. He now lives with his wife and two children in Wales, U.K. He has published almost twenty short stories. Secrets of the Dragon Tomb is his first novel.
Email Post
Labels: Adventure Fantasy Henry Holt Interview January 2016 Magic Middle Grade Children Patrick Samphire Q&A Science Fiction US Published