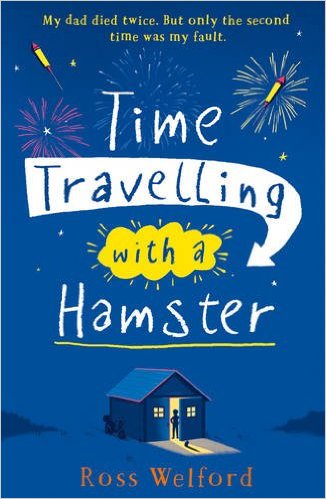 Laugh, cry and wonder at this race-against-time story of a boy who travels back to 1984 to prevent a go-kart accident, and save his father’s life…
“My dad died twice. Once when he was thirty nine and again four years later when he was twelve.
The first time had nothing to do with me. The second time definitely did, but I would never even have been there if it hadn’t been for his ‘time machine’…”
When Al Chaudhury discovers his late dad’s time machine, he finds that going back to the 1980s requires daring and imagination. It also requires lies, theft, burglary, and setting his school on fire. All without losing his pet hamster, Alan Shearer…

If you're like me and sometimes judge a book by it's cover, even though I know that you really shouldn't, then you could be forgiven for thinking that this book might be a little bit childish and that it might alienate some readers. Perhaps it's the combination of the book cover and the title that indicates this. I do believe that the bold blue cover is very good; it has been illustrated by the talented artist Tom Clohosy Cole, but I do wonder whether it would attract many 10+ year olds. However, once you get beyond this notion and start to read it you'll soon start to explore a plot which feels very much more grown up. It does not patronise the reader in anyway as it's fantastically written and is aimed at all readers that love a great story.

This is a cracking book, by a debut writer, to welcome in the new year with. The story will lift your spirits and raise your fantasy fists high into the air. It's a fantastically original story involving time travel which is used as a cog to drive the character on a emotional dodgem car ride of an adventure.

What if you could meet your dad as a kid and save his life?

When Al gets a letter on his birthday from his father, his life changes forever. The discovery of the time machine drives the plot as he attempts to go back to the 1980s. The story explores a full range of emotions from great hilarity to equally poignant and sad elements that will move you. One such point included the reuniting of Al with Grandpa Byron who mistakingly thinks that he is Pye.

Al Chaudhury's mission is to prevent a go-karting accident in 1984 in order to save his father's life. The added complication is that he needs to achieve this without losing his pet hamster - otherwise known as Alan Shearer! I thought this was a well chosen name as Alan is one of my personal heroes, but not as a hamster!

During a number of points in the story I was in stitches. The writing is very clever and sophisticated through the range of approaches used to share the main characters thoughts and feelings. This really helped the reader to understand Al and the bond between him and his family.

Towards the end of the story, I began to feel that some of the ideas were slightly unnecessary. They seemed to slow down the plot and could leave some readers feeling quite confused and a little disorientated. Nevertheless this was a brilliant read; it is totally original and captivating. I would wholeheartedly recommend this book to any reader. It will transport you to and from the 1980s in the blink of an eye!

Happy New Year to you all!