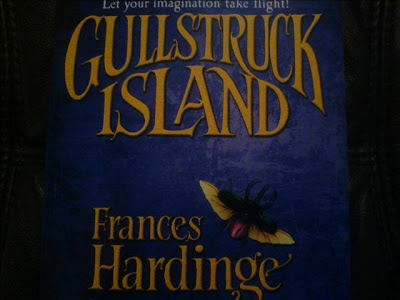 Frances Hardinge's imaginative use of words and language makes this book stand out.
The author is famous for the novel "Fly By Night" which in 2006 won the prestigious Branford Boase Award.

Frances has set this story in an imaginative fantasy world which has been cleverly constructed; making it sophisticated. With amazing word building and intelligent wordplay it makes this fantasy story stand out. The words run over you like a gentle sea on a calm sunny day, making it a really good read. It has every ingredient to keep you reading - love; treachery; revenge and jealousy. As well as a strong central character all wrapped up in a light energy known as the world of Gullstruck Island.

This book gets four out five a great book to buy and read and a must for all fantasy book readers.

Arilou is a Lost. She can depart her body and mind-fly with whichever senses she chooses. Hathin is her sister and helper. They live on Gullstruck Island, which depends on its Losts for communication, weather warnings, crime-solving and protection. But the little island has its tensions and is about to face a great threat. It will look to its Losts for safety. Worrying then, that Arilou and her sister share a dangerous secret that must never be discovered. With a blue-skinned assassin chasing them and only a dreadlocked warrior to assist, can the two girls live long enough to assure the future of their island home?

Short stories
Frances has been writing short stories for many years. These have been published in variety of magazines.

Frances Hardinge is a writer who wears a black hat. Notoriously unphotographable, she is rumoured to be made entirely out of velvet. Sources close to Frances who prefer not to be named suggest that she has an Evil Twin who wears white and is hatless. This cannot be confirmed.

Frances grew up in an old house in rural Kent, England where the wind wuthered. She has always liked dark stories - when she was six, she wrote a short story that included an attempted poisoning, a faked death and a villain being thrown off a cliff - all in just one page! Later she read English at Oxford University amid medieval towers and gargoyle-strung chapels.

I am so thrilled to have found your blog (right up my YA genre alley) and your mention of Frances Hardinge!!! I have been so bowled over by her first two wildly different by equally amazing books and I'm so anxious to get my hands on "Gullstruck." In all honesty, I just skimmed your review so that I wouldn't have any important plot points revealed to me.

I think I will have to break down and buy Hardinge's new book from amazon.uk since there is no American publication date for it yet... Sadly, the American publishers are not keeping up with the Edge Chronicles or Jonathan Stroud's new books either!

Some of the best fantasy books out in the US that I read last year are Ingrid law's "Savvy," Gaiman's "The Graveyard Book," Hardinge's "Well Witched," Lynne Jonell's "Emmy and the Incredible Shrinking Rat," and the latest in the Sisters Grimm series, "Tales from the Hood," by Christopher Buckley. Thanks for the great site - I have reviewed all of the above books on my blog, www.books4yourkids.com.