Paul Stewart and Chris Riddell - The Edge Chronicles - The Immortals 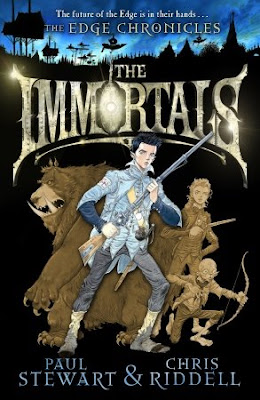 I read this book back in November before I started this blog. I had a copy nice and early so here is a quick review of the book and some thing I took of there web site.

The Immortals is twice as long as the other books in the series. After all, there were so many questions that needed to be answered. What happened to Quint in Midnight over Sanctaphrax? Did Twig make it to Riverrise at the end of Last of the Sky Pirates? What caused stone sickness to ravage the world? And what did happen to old Sanctaphrax?

It's another good adventure very enjoyable to read with all the great illustrated pages Chris Riddell has so amazingly done. It's more of the same from this series of books.A great new tale in the Edge all the adventure you expect with Paul's amazing story telling and superb imagination.

Is this the end of the Edge,or is it just the beginning....?

So if you like all the other books this is a must read for you!!!


These books will always be some of my favorite books which I have read. I also love meeting both guys which are some of my personal heroes of the book world.

Five hundred years into the third age of flight and mighty phraxships steam across the immensity of the Deepwoods, plying their lucrative trade between the three great cities. Nate Quarter, a young Lamplighter from the mines of the eastern woods is propelled on an epic journey of self-discovery that encompasses tournaments, battles, revolutions and a final encounter with the Immortals themselves. This is the final tale in the "Edge Chronicles" sequence and it's a fabulous climax to the most original and dramatic fantasy series being written today. Set years in the future, this book is ideal for new readers to discover the series before going back to read the 'history' of "Twig, Rook and Quint". Packed with incredible illustrations from Chris Riddell, this is a wonderfully funny, moving and utterly inventive book.