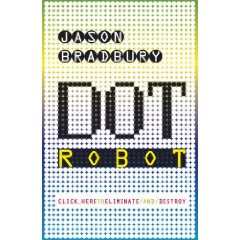 
Jason Bradbury, the UK's best-known face of technology, has been writing for many years.He first became serious about writing, as one half of a comedy double act with David Walliams (Little Britain)and now has progressed into writing his debut children's book entitled Dot Robot.

This fast paced techno-thriller has all the qualities of a great book and is an enjoyable read from cover to cover.It has a quick start and a pacey plot which keeps the reader hooked all the way to the end of the book. A great amount of research has gone into this book which makes it stand out as a vivid cyber world of computers, gadgets and robots. The characters in the book, known as Farley Jackson, Brooke and the Kojimas twins, are of great importance and add adventurous twists to the story. The unexpected end shows a moral dilemma for the characters to respond to.A great read for every one.

Five out of Five and looking forward to the next book in the sequence.........

Congratulations, Jackson. Welcome to MeX.’ Dot.com billionaire Devlin Lear, founder of the top-secret defence force MeX, has been watching Jackson Farley. He knows he has found a digital genius. Along with three other brilliant gamers from different corners of the world, Lear needs Jackson to join him and stop the criminal heist of the century. And all by the power of the most highly advanced, state-of-the-art robots ever invented. Are Jackson and the MeX recruits as good as Lear thinks? And how does Jackson know quite who to trust when they can never meet face-to-face?