Book Review Classic: Alfred Hitchcock and The Three Investigators In The Mystery of the Talking Skull By Robert Arthur 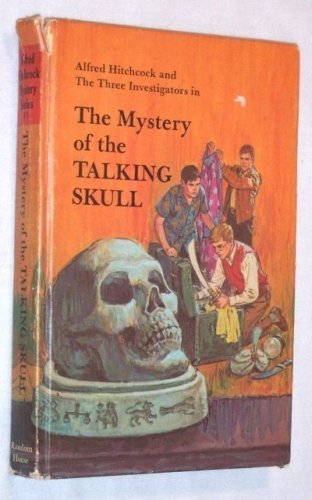 I'm always keen to read new books from the past, especially a series of books that have passed me by. In this case I have Darren to thank from the Book Zone Blog for boys. I picked up this recommendation from one of his tweets a few weeks ago. This is a real hidden gem - I always find it interesting to look back and notice the difference. In this case, the time frame in which it was written is before the internet and the rapidly changing digital world.

Book one was published in 1964 and, 43 books later, the very last book was published in 1987. Due to legal issues (with publishers and such) nothing has happened since 1990 and this may still remain the case in the future.
Whilst I would love to read more books in this series, I don't think this is going to be an easy task - some books appear to be out of print and some were published in the US as part of another series. However, I do feel slightly hopeful that I might be able to find another example as I found this book in a local charity shop. Therefore, I  think you know where I'll be looking and what I'll be doing in the next week or so!

Many different authors are featured in this series such as William Arden, Nick West and Robert Arthur (the creator). Robert penned many of the original ideas and edited most of the early books. In fact the book that I've just read was written by the master himself. It is a fantastic introduction to the books. It would appear that all of the authors have written their own introductions and epilogues. These were reportedly dictated by Hitchcock in the early books.
This book entails a classic mystery for three boys to sort out. Centered around their uncle's scrapyard, an absolutely brillant idea, Jupiter Jones buys an unusual old-fashioned trunk in an auction. Looking through the contents of the trunk, they discover a talking skull which sets them off an epic adventure of sinister proportions. It's a classically well told story that every young boy, and even every old boy, would still love to read today.
This is an example of when books were based on pure imagination. Full of good creative ideas which have been told in a simplistic way. By the time I had finished this book, I felt about ten years old. Let the search commence for the next book.
If you remember reading these books, then please leave a comment on the post. I would love to hear what you've got to say.
By Mr Ripley's Enchanted Books on February 04, 2013

I devoured a number of these from the local library as a kid - they've all kind of blurred into one narrative in my mind. I do remember Hitchcock turning up as a character - I think that real life/fiction blur kind of confused me. Also, I remember something like the kids had won use of limo in a competition for a month, and this plot device was used in several books to quickly get them places - so they clearly fell straight out of one adventure right into another! Does that ring any bells?

I've only read two books so far, limo competition was mentioned as a passing comment. Not sure which book that starts from. Hitchcock plays a little role in all the early books, I think. I find that rather cool!
I missed them as a child, so I'm looking forward to tracking the other books down. Thanks for the comment Roy.