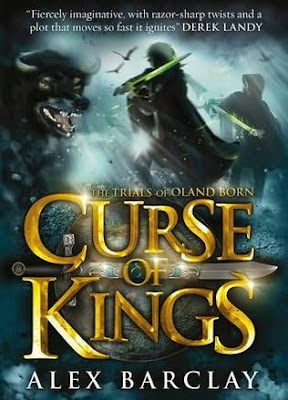 The Trials of Oland Born Part One

Fourteen-year-old Oland Born lives in a world  tyrannised by dark magic. He knows little
about his past or why the evil tyrant Vilius Ren keeps such a sharp eye on him. But when he
receives a letter from a long-dead king which urges him to fight back, Oland must battle his
own demons to undertake the greatest test of bravery and cunning a boy has ever faced.

Curse of Kings is the first story in The Trials of Oland Born and is a thrilling fantasy adventure
that will grip readers from the outset.
The story is set in a beautifully evoked and richly atmospheric fantasy world of medieval
castles, Romanesque games arenas, supernatural forests, desert pits and harsh seas.
Terrifying hybrid creatures and monsters abound – and Oland’s greatest ally is a girl called
Delphi who has dark secrets of her own.


About the author:
Alex Barclay is the award-winning author of five crime novels for adults. She has been living with the world of Oland Born inside her head for years, a world of adventure, mysterious prophecies, secret identities, fantastical creatures and great heroes who are tested to their limits. Curse of Kings is her first novel for children, and the first in The Trials of Oland Born series. She is a major new voice in children’s fiction. Alex lives in Ireland.