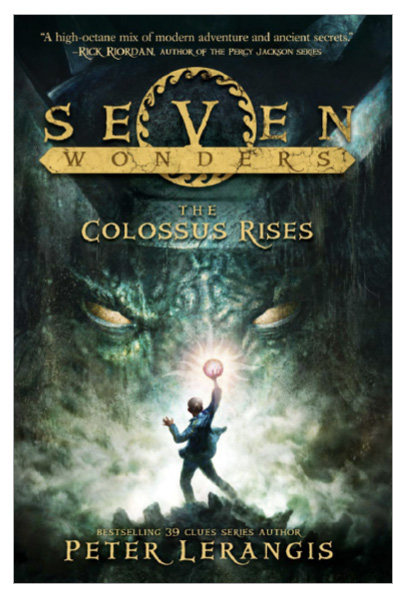 Peter is the author of over 160 books. Some of his recent books from The 39 Clues have been listed in the New York Times Bestselling Series.  However, this is the first book that has been published as part of a new series of seven books and will be published in the next two years or so.

Jack McKinley's normal life has just ended. Rushed into hospital he is told that he only has six months to live. However, when he awakes he finds himself on a mysterious island. A secret organisation promises to save his life, but on one condition. Jack and his new found friends Cass, Ally and Marco need to retrieve seven magical objects that, only when combined together, keep them alive. They need to work together on a mission, they have no choice but to undertake the quest. Solving clues and working out the mysteries to the secret locations they find themselves weaving through lost civilisations and mythology.
One of the books hidden strengths is the cast of great characters. You will bond with each one as you follow them through their adventures - battling the consequences of their genetic disorder which enhances their unearthly powers. This aspect of the story reveals many emotions and teenage angst, giving it both a human and realistic quality that I liked. The book also delivers a timely and humorous nature to the story which is played out in a fun way and will have you chuckling along at various points.
This is a great introduction to the series - an epic fantasy, which is fuelled by high-octane action and great imagination. It will fuel the minds of both the young and old. An immersive book that will be an instant hit with reluctant readers. It's a book in my opinion that is hard to put down unless you have to do so. Well depicted, it is set in a breathtaking fantastical setting, with sparks of both magic and danger around every corner. It finishes on a real nail biter with a hive of film-like quality sequences that will leave you wanting more.

If this sounds like your kind of book or you need a little more persuading to read it, then check out the book series website. You will also be able to read and download a free prequel ebook (Seven Wonders journals) and lots of other cool things. Just follow this link HERE

I have come into possession of a Gold Pen Set comprising of a Fountain Pen, a Ball Point Pen and a Fibre Tipped Pen, all in Gold and marked Pentique, Italy on the Clips. Really smart looking and feel wonderful to hold. Would these be of any interest to you or would you know anyone who would be interested please. They are in a box but that has sadly been damaged on the lid. Could you please help with some information.

Hi Mick
Sounds like a nice pen,
I can't really help you, as I specialise in the brands Parker and Waterman and also mainly vintage pens. If you want to sell it, put it on Ebay is my advice. You will get what it's worth then. Thanks for getting in touch,Mick.

Nice post! I've reviewed seven wonders too, Though I didn't really like it as much as you did. I think because it was a little too complex.