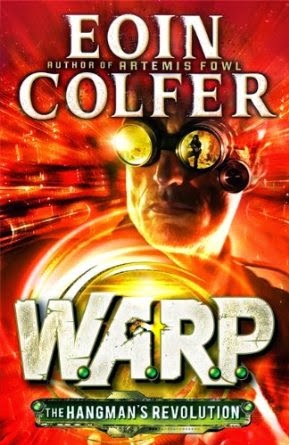 "The old maxim that every action has a reaction is true, but when you start messing with time travel, that reaction could take place in a whole different universe." —Professor Charles Smart


This is the next instalment in the fantastic series 'W.A.R.P'  and what a sequel this book is. With an eye dropping cover, this is surely going to be snapped up by readers. I was incredibly pleased to receive this book in my mail box. It read incredibly well; I was not disappointed in any way. Well, only when it finally ended.

I warped with full speed into the story; my mental agility soon reached overload. From the very first page, the reader is flung straight into the action following young FBI agent Chevie bags-of-attitude Savano. Trapped in a nightmare future, she needs to return to 19th century London to change the course of history. Can she do it? Well, that you will have to find out.  Along the way she receives support and help from her 19th century friend Riley (boy magician) and the Victorian gangster Otto Malarkey (current leader of The Battering Ram's). All in all, these add up to a charming little gang of cutthroats, serial killers and petty theft merchants that you are ever likely to read about and follow.
Chevie becomes involved in a mission to save the world. The only problem with this is that she has to battle a group of crazy villains known as the Boxite Empire. These villains have brought the military technology of the future to the 19th century and want to use it to take over the world.  The storyline is full of explosive action. Rampaging all over Victorian London, tanks blow up historical buildings and important monuments. Never mind the couple of machine gun wielding warrior-nuns, known as the Thundercats, that  give the story a thumping great punch in the guts. It sounds very surreal, but it all adds up to a fantastic read.
I really loved the interaction of the characters: the ying and yang,  the villains and heroes, male and female partnerships. All of these elements bring about crashing twists and turns that will leave you on a knife edge. This book feels like an older read; looking back to the first book 'The Reluctant Assassin' this is told through the perspective of young characters and doesn't indulge in the same intellectual use of language. The humour is side splitting; it is almost slapstick in parts. You laugh once, you laugh twice and you'll easily laugh a third time as Eoin Colfer runs riot with the plot. The creative genius of this author is what only most of us can dream about writing.
This book is one of the best reads of this year. It might be crazy, but it is a joy to read. The reader's smile will grow stronger from start to finish. Although there is also a dark and bloody side to the story. Some scenes have so much energy and spirit that they will stay with you for some time, perhaps even into the next century!
This is a brilliantly written adventure - it is highly creative and a feast of fun. Houdini meets The Matrix with a Dickensian twist. Mr Ripley's Recommend read for June 2014.

"I knew a guy once who liked  to argue about time travel. He liked to line things up, consequences and so forth. This moron thought winning the argument made him right. The wormhole doesn't care about words. What happens, happens.  —Professor Charles Smart
By Mr Ripley's Enchanted Books on June 26, 2014

Cracking review! Looks like you've added another book to my already groaning to be read pile...