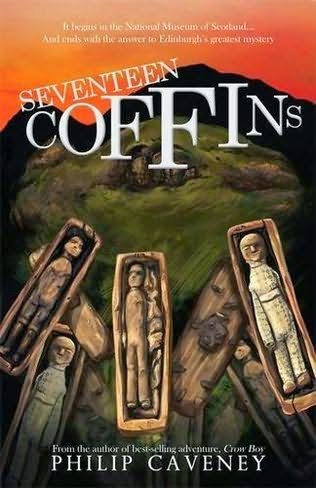 We have just moved on from Crow Boy, the first book, to find that Tom has wasted no time falling head first into another nightmarish adventure in and around Mary King's Close, Edinburgh. It all starts off with that familiar feeling, where the world shudders around him; that horrible sensation as he finds himself lost and lonely once more.
The book is loosely based on historical places, events and people just like the first book 'Crow Boy'. It isn't really necessary to read this book first, but it may help if you do so, in my opinion. Besides which it is a great book and well worth the read anyway. The narrative begins at the National Museum of Scotland. A place with so much mystery - what might Tom find? It all starts with the eight tiny coffins that were discovered at Arthur's Seat in 1836. There is a tiny figure in each one; they soon become a very significant part of the ongoing story. You'll find that your curiosity increases as you are flung into the world of the past.
Philip uses his creative imagination exceptionally well to weave many elements into a captivating story. The nineteenth century comes alive through three dimensional descriptions of sight, sound and smell. Each aspect enables you to really visualise the place and time of the story. Philip creates an intelligent and very interesting read.
The magical time travelling adventure will suck you from modern day time into the nineteenth century within a blink of an eye. Tom finds himself running from his old nemesis, the bogus plague doctor, William McSweeny, as well as other unsavoury characters from the past. Without giving too much away, these are definitely my favourite characters from the book; they bring a dark and moody feeling to the story which is SO good. I really loved this section of the book.
I have nothing negative to say about this book; it is a great sequel to Crow Boy. Easy to follow, yet it also has a great historical insight to it. Fast-paced dialogue between the characters keeps the storyline flowing. Whilst the mysterious element and edge to the plot keeps you rooted to the end. The story is based around a dark world full of shady characters - it is a struggle for survival. Beware though . . . . there are some gruesome encounters that will have you running for cover.
A lighter and more playful side to the story also exists such as Tom teaching his new friends twentieth-century slang; this section is particularly well written and rather funny. This story has all of the right ingredients to entice anyone and everyone to read it. Interesting, educational and a ripping good adventure that will fill your head. Poor Tom finds that time is once more slipping away from him. Hopefully this will soon lead us to another adventure very soon.
Published by Fledgling Press (22 April 2014)

Other books by Philip Caveney
Sebastian Darke Series:
About Philip Caveney
Philip Caveney was born in North Wales in 1951. The son of an RAF officer, he spent much of his childhood travelling the length and breadth of Britain and spent several years in Malaysia and Singapore.


He attended Kelsterton College Of Art in North Wales where he obtained a diploma in Graphic Design. Whilst there, he became drummer (and latterly vocalist) with rock band, Hieronymus Bosch.
After leaving college, he worked extensively in theatre both in London and Wales and wrote the lyrics for rock adaptations of The Workhouse Donkey and Oscar Wilde's Salome.
His first novel, The Sins Of Rachel Ellis, was published in 1977. Since then, he has published many novels for adults and since 2007, a series of children's books that have sold all over the world.
Posted by Mr Ripley's Enchanted Books on June 16, 2014