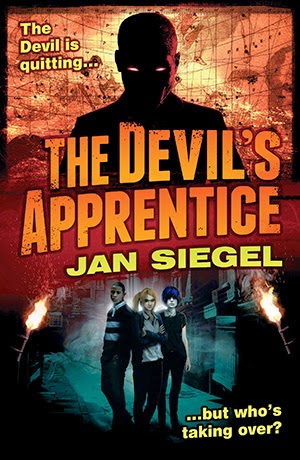 The Devil is retiring... but who’s taking over? When teenage Pen inherits the job of caretaker for a London building with no doors and only a secret entrance from the caretaker’s lodge – which she must never use – little does she know it will lead her into unbelievable danger. For Azmordis, also known as Satan, a spirit as old as time and as powerful as the Dark, Immortality is running out.In the house with no front door, a group of teenagers are trapped in assorted dimensions of myth and history, undergoing the trials that will shape them to step into his cloven footwear – or destroy them. Assisted by only by an aspiring teenage chef called Gavin and Jinx, a young witch with more face-piercing than fae-power, Pen must try to stop the Devil’s deadly game plan – before it’s too late.By turns very funny, very scary and always thrilling, this is an incredible return to YA for Siegel. Brilliant five star entertainment.

About The Author: Jan Siegel is a pseudonym of Amanda Hemingway (born 1955 in London, UK). Jan Siegel has written in several different genres under several different pseudonyms, but fantastical realism remains her preferred form of fiction. She also works as a poet, journalist, freelance editor, and occasional teacher, her interests covering a wide range of subjects including horse riding, adventure travel and wildlife conservation. First published at an early age, she has spent her life accumulating assorted experiences and then not writing about them. It has been said that an academic is someone who knows a lot about a little, while a writer is someone who knows a little about a lot. Siegel claims she knows very little about a hell of a lot. An idealist, she is continuously surprised to find fact stranger than fiction and real human beings even more bizarre than any character in a book.