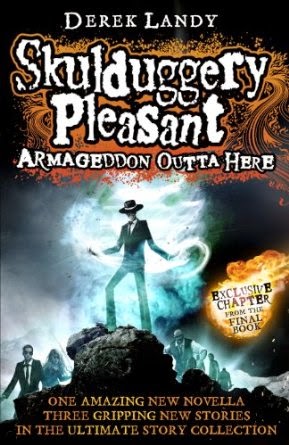 Derek Landy - Armageddon Outta Here ( The World of Skulduggery Pleasant)  - Published by HarperCollins Children's Books (3 July 2014)
One AMAZING new novella.
Three GRIPPING new stories.
In the ULTIMATE story collection.
We all know that doors are for people with no imagination so smash the glass, climb through the window and enter the awesome world of Skulduggery Pleasant with this ultimate story collection.
For the first time, every Skulduggery Pleasant short story – plus The End of the World, the World Book Day novelette – is collected into one magnificent volume. But that's not all…
Written specially for this collection, there is an entirely new novella that will drag you into a nail-biting American horror story, Skulduggery-style, and three brand-spanking-new stories spanning the last 150 years. Join Gordon Edgley as he parties like it's 1985, watch Valkyrie Cain face a vampire in a fight to the death, and see the Dead Men as you've never seen them before. And then read the exclusive chapter from the final book…
Introduced by Derek, these are the hidden stories of the skeleton who saves the world… and the girl who's destined to destroy it. 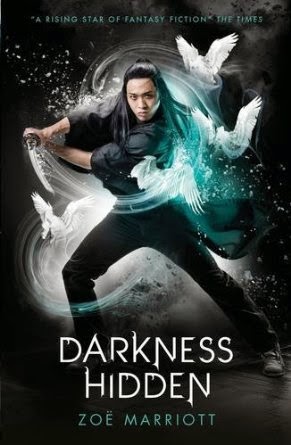 Zoe Marriott - Darkness Hidden ( The name of the Blade) - Walker (3 July 2014)
Against all odds, Mio, Jack and Shinobu have defeated the terrifying Nekomata and got home alive. But Mio is still compelled to protect the katana, and now the Underworld has spawned a worse monster - one carrying a devastating plague that sweeps through London like wildfire. As Mio struggles to protect the city and control the sword's deadly powers, she realizes that this time there is no way she can keep everyone she loves out of the line of fire. 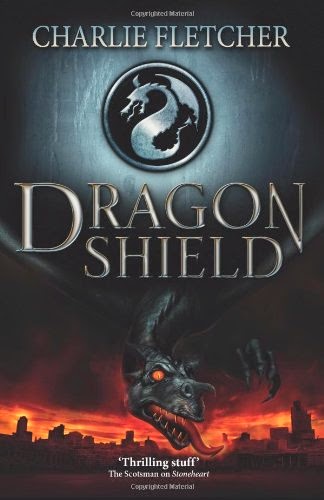 Charlie Fletcher - Dragon Shield Bk 1 - Published by Hodder Children's Books (3 July 2014)
The start of a thrilling, action-packed trilogy from Charlie Fletcher, set in a world where statues come to life and dragons and heroes battle.
Something dark has woken in the British Museum, and it has stopped time, literally freezing the city in its tracks. The people are there, but unmoving, unseeing - like statues. The statues, on the other hand, can move, and are astonished at what they see.
In the Great Ormond Street Hospital, Will and Jo are suddenly plunged into this world of statues - and find themselves pursued by murderous dragons. With help from a couple of friendly statues, Will and Jo must escape the evil that stalks them in the streets of London.
With beautiful illustrations by Nick Tankard. 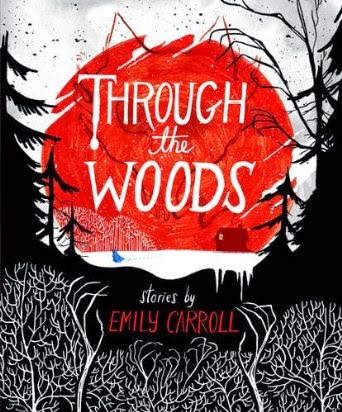 Emily Carroll Through the Woods - Published by Faber & Faber (3 July 2014)
It came from the woods. Most strange things do.'
Five mysterious, spine-tingling stories follow journeys into (and out of?) the eerie abyss.
These chilling tales spring from the macabre imagination of acclaimed and award-winning comic creator Emily Carroll.
Come take a walk in the woods and see what awaits you there...
By Mr Ripley's Enchanted Books on June 19, 2014