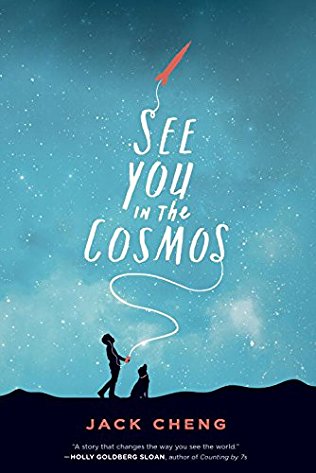 A space-obsessed boy and his dog, Carl Sagan, take a journey toward family, love, hope, and awe in this funny and moving novel for fans of Counting by 7s and Walk Two Moons.
11-year-old Alex Petroski loves space and rockets, his mom, his brother, and his dog Carl Sagan - named for his hero, the real-life astronomer. All he wants is to launch his golden iPod into space the way Carl Sagan (the man, not the dog) launched his Golden Record on the Voyager spacecraft in 1977. From Colorado to New Mexico, Las Vegas to L.A., Alex records a journey on his iPod to show other lifeforms what life on earth, his earth, is like. But his destination keeps changing. And the funny, lost, remarkable people he meets along the way can only partially prepare him for the secrets he'll uncover - from the truth about his long-dead dad to the fact that, for a kid with a troubled mom and a mostly not-around brother, he has way more family than he ever knew.

See You in the Cosmos is the first book to be published by the outstanding new talent, Jack Cheng. The novel will be jointly published by Puffin Books, here in the UK, and Dial Books for Young Readers in the US. It's a fantastic story that will make its maiden voyage into the cosmos on a golden iPod and beyond from early March 2017.

The skies will certainly move and the stars will shine brightly with every page turned. It's an uplifting and poignant story which is told with passion. It has been written from deep within the author's heart. As you skip your way through the book, following 11-year-old Alex Petroski (space obsessed boy) through a moving landscape of emotions, his distinctive voice will pull you through a turbulent narrative that is one of the best that I have read for some time. Other people will make comparisons to other books but, in my opinion, that is not really fair. This book and its plot is a unique reading gem and one that I would definitely recommend for you to read.

When I received this book for review, I initially had my doubts about it. I loved the book cover but the synopsis did not really grab me. It was only when I opened the first page that I became hooked by the internal voice from the main character; it's brilliant, compelling and very special. Alex records everything and the story plays out through a sequence of recordings from his golden iPod. He records the story of how he travels to New Mexico, to a rocket festival, with his best friend, Carl Sagan (his dog), who was named after his hero the American Astronomer. The ongoing transcript of Alex's iPod is brilliant and a really quirky way of telling the story.

It is a very moving and powerful story. Alex finds out that a man, with the same name and birthday as his dead father, has an address in Las Vegas. From this point forward, the story will move you incredibly as you laugh and cry throughout this amazing journey. One minute you will be flying to Mars on a tank full of LOX immersed in great humour, but then you'll find yourself catapulted onto a rollercoaster full of acronyms and emotions that will hit your senses. It soon brings you crashing back to earth with sadness, a heavy heart and a feeling of emptiness.

I hope you that you will read this book once it has been published as it will make you look at the world and people around you in a different light. It will pump you full of empathy and humility and should, hopefully, also show you the joy of being alive. It's a fantastically inspiring read that will take you out of the stratosphere and stay in your heart for a very long time. The last time I felt like this was reading 'The Bubble Boy' by Stewart Foster. Fantastic, riveting and I have awarded it five golden stars!