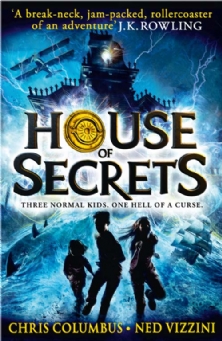 Time flies when you're having fun! This time last year, I remember being excited by the prospect of this book and the subsequent dream collaboration between two great writing icons. The first writer being Chris Columbus, who has written and produced so many great classic household blockbusters, such as the first two Harry Potter films, Gremlins and one of my all time favourites, The Goonies.

To add more excitement to the pot, he has teamed up with Ned Vizzini, the US bestselling author of young-adult books and screen programmes such as Teen Wolf and the ABC'S Last Resort. Last year, HarperCollins struck up a three book deal which created a great deal of discussion and conjured up a lot of eager anticipation. One year on, the first book has finally arrived and I certainly couldn't wait to read it.

This is the first in the series of the House Of Secrets to be published by HarperCollins. It will be hitting the bookshop shelves in late April. It's a very fast paced read and doesn't take long to hurtle through the 560 pages. From the offset, you uncover many secrets and mysteries - it's like an epic film script. There are some tasty glimpses of the pedigree of both writers who, at times, share slightly different visions. One writes in a film-like style, whilst the other writes in a more traditional storytelling way. At times, there might be too much emphasis on the big screen. Although, in my opinion, this will certainly be a forthcoming option for this book.

The Walker kids had it all: loving parents, a big house in San Francisco, all the latest video games . . . but everything changed when their father lost his job as a result of an inexplicable transgression. Now the family is moving into Kristoff House, a mysterious place built nearly a century earlier by Denver Kristoff, a troubled writer with a penchant for the occult. By the time the Walkers realize that one of their neighbours has sinister plans for them they're banished to a primeval forest way off the grid.

The story begins with a mysterious start. It contains little bits of cheeky humour and some good story lines. However, in parts, a slightly darker flavour is perhaps needed to really get into the essence of the story. The characters, as a reader of 9 years and up, can easily be related to and the story concludes satisfyingly. However, there are a few negative elements to the story, in my opinion.

I felt that the story read like a mixture of different stories which, at times, all collided into one. The collaborative writing, to me, read like a jumble of ideas which were all thrown together. I have no doubt that this would work particular well as a film, but I struggled to make it work in my head. Therefore, it hindered the flow and spoilt the story in my opinion. I also felt that there was a distinct lack of voice from any one character - they really didn't stick in my memory and were easily replaced.

However, for a middle-age fantasy, this book ticks all of the right boxes and shows a lot of promise. It contains high adventure scenes, which share a similar theme to that of Pirates of the Caribbean. These are loaded with engaging action sequences that I particularly enjoyed.

This book was an enjoyable read, but not as good as the hype. I was slightly disappointed, but I'm still looking forward to the next book in the series.

I had been wondering about this one - looks so shiny, but I'll have to bear in mind what you've said about the characters, since they're probably what I enjoy the most in stories, even over plot.

Cheryl @ Tales of the Marvelous said...

I love the title here...harder to judge re: the actual plot. Though any comparison to Pirates of the Caribbean is a good sign!

I've been wanting to read this one, of course I'm one for "cheeky humor". The cover looks very different from the one on Goodreads, wonder why.

Hello Brenda, I think the cover on Goodreads is for the US Edition. Which I don't really like, to be honest!
Thanks for the comments all!