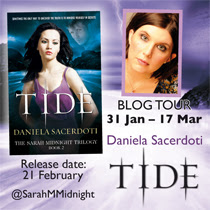 Many thanks to Daniela for this character profile. Her enthusiasm for Niall really shines through this guest post. I'm sure that you'll enjoy reading and following him as much as Daniela has enjoyed writing about him. The book was published on the 21st February - if you haven't already read the first book in the 'Sarah Midnight' series then you might want to consider reading both books. Happy reading.

Niall is the heir to the Irish Secret Family of the Flynns. They have a strong connection with the sea, and water in general, and can’t be killed by drowning. He also has the gift of Song, a Secret power that allows him to kill and stun with his voice, and to change the weather. These abilities have saved Niall from many disastrous encounters with all sorts of Surari, and as he finds himself later on more adventures in the blue waters of Scotland, these traits also come in handy on more than one occasion.

Niall Flynn’s carefree, mellow, happy-go-lucky character is endearingly at odds with his deadly powers. Mike, one of Harry Midnight’s Gamekeepers, entrusted to look after Niall, is initially deceived by his jokey and relaxed attitude but slowly gets to know him during their time in Louisiana, and discovers his courageous, loyal nature. Mike and Niall form a strong friendship, almost a brotherly bond, which helps both of them ease the pain of being away from the families they left behind. As the two travel across the ocean, they grow even closer. They are the comic relief in the series, and their interactions add a humorous undertone to the fight against the demons.

Niall also has a weakness for the pretty ladies, not least of all new character Winter, a beautiful half-Elemental creature of the sea, who arrives under mysterious circumstances, and particularly catches Niall’s attention.

Niall is a keen musician and a singer; he can play anything he puts his hands on, and when he and Mike finally meet Sarah, Niall’s interest in music breaks through her usually reserved nature and allows them to connect at once. Along with music, Niall also has a keen fondness for the amber liquid, whisky.
Niall has been one of the most fun characters to write. He’s the jokester of the group, always up for a laugh, yet naïve and full of personality, but when he must, he resumes a serious nature and unleashes extraordinary powers. I love writing about Niall and Mike’s experiences together, and Niall especially captures my heart!
By Mr Ripley's Enchanted Books on March 01, 2013