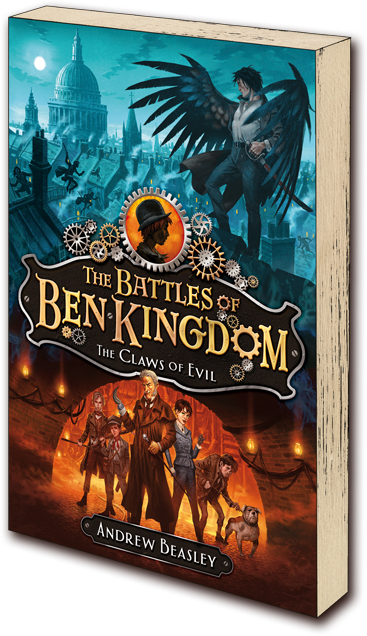 This striking book cover has been illustrated by David Wyatt. I am a huge fan of David's work - back in June he did a post on his blog "Angels (Over London) and Demons (with rollerskates)" where he showcased this particular debut book cover image. Ever since then, I have been really excited to read this book. Just looking at the illustrations and images made me want to plunge straight into the book. Therefore, I was delighted to finally get the chance to read it this week.....

The pace in which the story is told is phenomenal, with a blink of an eye you're soon in the thick of it. It's 1891 and London is at war. It's an underground and overground battle between good and evil. A ragtag band of orphans and spies, known as the Watchers, are the protectors of the city. Whereas high up in the roof tops, the Legion are a ruthless gang of cut-throat thieves. Lurking around every street corner, they can be heard plotting to unleash the darkest forces of HELL.
The main character in this story is Ben Kingdom, a street urchin and a loner, who is cocky by nature. However, when a mysterious coin falls into his hands he is flung into the midst of an ancient battle where the fate of the rest of the world rests with him. The coin yields a strange and mysterious power, which at times clouds Ben's judgment . However, it makes for good reading and creates some interesting twists.
This is a great urban fantasy story full of well-depicted characters including the mysterious Weeping Man, the blind Jago Moon and the evil, power-crazed Professor James Claw Carter. Never mind the host of secondary characters whom you will also enjoy meeting. My favourite being The Feathered Men - killing machines who are part-man and part-bird with a lust for blood. They hide in the chambers of the subterranean world of Under - the secret realm of tunnels and catacombs that the Legion call home. They introduce a slice of the unknown to the book. An element of uncertainty and a heightened sense of fear, which I really loved and would like to see more of in the next book.

The only slightly negative aspect that I have to say about the book involves the ending, which I found somewhat predictable although action packed. Nevertheless, this is an enthralling start to a series for the 9+ age range which children will be able to relate to and enjoy. Andrew's debut book puts fantasy back on the map this year. It is certainly a book that the publishers can be proud of publishing.
The next battle, The Feast of Ravens, will be flying by a bookshelf near to you in September. I, for one, am really looking forward to that.

If you would like to read the first chapter click Here
By Mr Ripley's Enchanted Books on March 05, 2013

I've been looking for a good steampunk novel to read! This sounds like just the one!